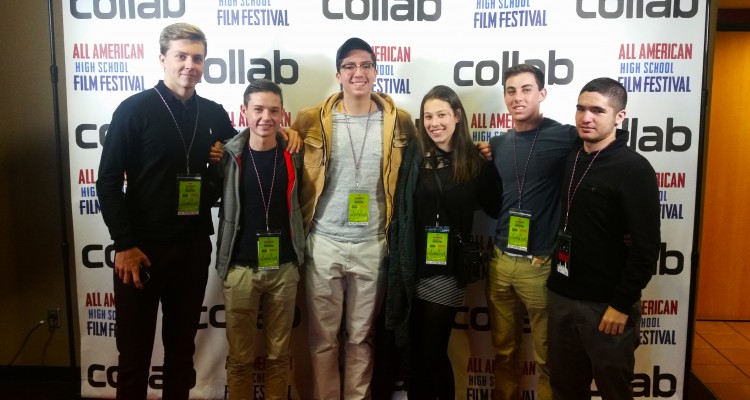 In May of 2016 it was confirmed that seven passionate filmmakers from Pine Crest were accepted into the second Film Invitational Competition hosted by the All American High School Film Festival. This film team was given 10 weeks of preproduction and exclusive permits to iconic locations in New York City for shooting.

The invitational this year was sponsored by AT&T and the Tyler Clementi Foundation who tasked these young filmmakers with sharing a story about cyberbullying. Prizes, recognition and an opportunity to produce a web series were at stake.

Despite Hurricane Matthew raging, the team led by Kerri-Anne Alexanderson and Dave Burgess boarded a plane bound for NYC last Tuesday after tirelessly creating a script and shooting schedule. On Wednesday the team were lucky enough to film in the Union Square apartment, of alumni Evan Kelman, whose brother Seth Kelman wrote and directed the film. Later in the day students were able to film in the heart of midtown at the building formerly occupied by AT&T.

Thursday’s shoot brought the team to a Chelsea apartment thanks to team members Justin Danzansky and Jodie Kahan and then to Central Park. Friday was all post production, editing and graphic creation. For the next two and a half days the team would attend screenings viewing films from high school filmmakers from around the world, network with award winning filmmaker and festival founder Andrew Jenks, and other prominent industry members as well as other aspiring young filmmakers.

Modern Escalation is a six minute short film that features a young man who makes a risky decision posting a questionable comment to social media. The film follows his experience with the consequences of his actions. Modern Escalation was named one of eight finalists in the Film Invitational (out of 28 schools) and was chosen by AT&t and Filmscreen to receive a $25,000 grant to create a web series about cyberbullying.

The team is eligible for an audience award based on public voting beginning today through October 28th.

The Process was written, directed and edited by Alexander Edep.

Wannabe was written and directed by Alexander Edep, starring Tommy Sullivan, Hunter Potak, and Jason Kelman. It was produced by Michael Kennedy and Adrian Abedon.

Clockwork was written and directed by Seth Kelman with cinematography by Justin Danzansky. Starred Sebastian Bell, Hunter Potak, Jason Kelman and was narrated by Mason Berger.