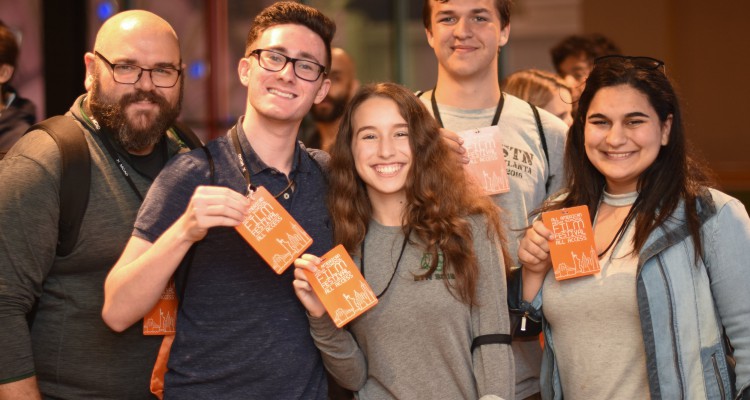 Students competed in three competitions; each included a 10-week pre-production period where students were provided with footage or themes to incorporate into their final product. Peter Perri ’20 participated in a one-day edit challenge where he was given “found footage” and challenged to make a story out of the visuals and sounds he received.

Jeremy Oletsky ’19, James Hart ’20, Zoe Fermanian ’20, and Jake Oletsky ’21 comprised the film crew that participated in the Claustrophobic Room Challenge, where their entire film could only take place in one room. The team developed a screenplay about a man re-evaluating important life events that took place in a hotel room. “Washed Up” (this video may not be appropriate for young viewers) was completely written, shot, and edited by the team who also had to go through a casting process with actors from New York City and the challenges of cramming a four-person crew and four actors in to a hotel room. The finished product was named a finalist in the overall competition.

Ross Bauman ’19, Alexis Bernstein ’20, Ryan Dudak ’20, and Gaby Khoriaty ’20 comprised the broadcast team exploring “A New York Story” traveling through some of the five boroughs to unearth the uniqueness of culture and language found in the City. The broadcast team was named the Overall Winner of the two-day broadcast competition. The reward included winning script writing software, editing software, and the opportunity to attend one of the AAHSFF University courses this year. The team also received a Teen Indie Award trophy for their efforts and achievement of excellence in their category.

After the competitions ended, students spent the day watching other student films at the AMC in Times Square including “House 10-16” written and directed by alumni Alexander Edep ’17, director of photography Justin Danzansky ’17, and special effects make-up by Zoe Fermanian ’20.
Students also attended a college fair focused on television, broadcast, and film schools, attended panel discussions from industry insiders, and were exposed to industry standard equipment throughout the weekend.

Finally, as a member of the video production resource community, Upper School film instructor Ms. Kerri-Anne Alexanderson was named Teacher of the Year! In addition to an official Teen Indie Award trophy, Ms. Alexanderson received a $1,000 cash prize from AAHSFF for her efforts.